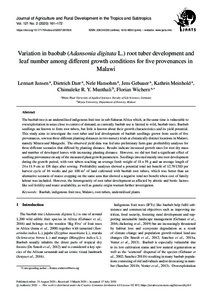 The baobab tree is an underutilised indigenous fruit tree in sub-Saharan Africa which, at the same time is vulnerable to overexploitation in areas close to centres of demand, as currently baobab use is limited to wild, baobab trees. Baobab seedlings are known to form root tubers, but little is known about their growth characteristics and its yield potential. This study aims to investigate the root tuber and leaf development of baobab seedlings grown from seeds of five provenances, sown at three different planting distances in two nursery trials at climatically distinct locations in Malawi, namely Mzuzu and Mangochi. The observed yield data was fed into preliminary farm-gate profitability analyses for three different scenarios that differed by planting distance. Results indicate increased growth rates for root dry mass and number of developed leaves with increasing planting distance. However, we did not find a significant effect of seedling provenance on any of the measured plant growth parameters. Seedlings invested mainly into root development during the growth period, with root tubers reaching an average fresh weight of 41 ± 39 g and an average length of 24 ± 11.9 cm at 138 days after sowing. Profitability analyses showed a potential total net benefit of 12.78 USD per harvest cycle of 16 weeks and per 100 m² of land cultivated with baobab root tubers, which was better than an alternative scenario of maize cropping on the same area that showed a negative total net benefit when cost of family labour was included. However, the heterogeneity of root tuber development as affected by abiotic and biotic factors like soil fertility and water availability, as well as genetic origin warrant further investigation.