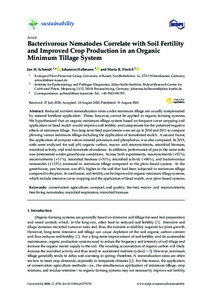 Reduced nutrient mineralization rates under minimum tillage are usually compensated by mineral fertilizer application. These, however, cannot be applied in organic farming systems. We hypothesized that an organic minimum tillage system based on frequent cover cropping and application of dead mulch would improve soil fertility and compensate for the potential negative effects of minimum tillage. Two long-term field experiments were set up in 2010 and 2011 to compare plowing versus minimum tillage including the application of transferred mulch. A second factor, the application of compost versus mineral potassium and phosphorus, was also compared. In 2019, soils were analyzed for soil pH, organic carbon, macro- and micronutrients, microbial biomass, microbial activity, and total nematode abundance. In addition, performance of pea in the same soils was determined under greenhouse conditions. Across both experiments, macronutrients (+52%), micronutrients (+11%), microbial biomass (+51%), microbial activity (+86%), and bacterivorous nematodes (+112%) increased in minimum tillage compared to the plow-based system. In the greenhouse, pea biomass was 45% higher in the soil that had been subjected to minimum tillage compared to the plow. In conclusion, soil fertility can be improved in organic minimum tillage systems, which include intensive cover cropping and the application of dead mulch, over plow-based systems.