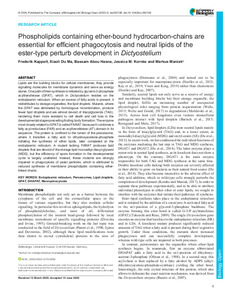 Lipids are the building blocks for cellular membranes; they provide signalling molecules for membrane dynamics and serve as energy stores. One path of their synthesis is initiated by glycerol-3-phosphate acyltransferase (GPAT), which in Dictyostelium resides on the endoplasmic reticulum. When an excess of fatty acids is present, it redistributes to storage organelles, the lipid droplets. Mutants, where the GPAT was eliminated by homologous recombination, produce fewer lipid droplets and are almost devoid of triacylglycerols (TAG), rendering them more resistant to cell death and cell loss in the developmental stages preceding fruiting body formation. The enzyme most closely related to GPAT is called FARAT, because it combines a fatty acyl-reductase (FAR) and an acyltransferase (AT) domain in its sequence. The protein is confined to the lumen of the peroxisome, where it transfers a fatty acid to dihydroxyacetone-phosphate initiating the synthesis of ether lipids, later completed at the endoplasmic reticulum. A mutant lacking FARAT produces lipid droplets that are devoid of the storage lipid monoalkyl-diacyl-glycerol (MDG), but the efficiency of spore formation in the developmental cycle is largely unaltered. Instead, these mutants are strongly impaired in phagocytosis of yeast particles, which is attributed to reduced synthesis of membrane phospholipids containing ether-linked chains.