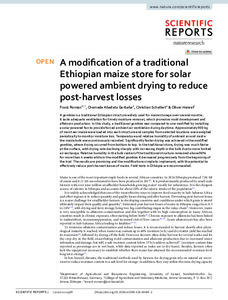 A gombisa is a traditional Ethiopian structure widely used for maize storage over several months. It lacks adequate ventilation for timely moisture removal, which promotes mold development and aflatoxin production. In this study, a traditional gombisa was compared to one modified by installing a solar powered fan to provide forced ambient air ventilation during daytime. Approximately 900 kg of moist ear maize were loaded into each structure and samples from selected locations were weighed periodically to monitor moisture loss. Temperature and relative humidity of ambient air and inside the maize bulk were continuously recorded. Significantly faster drying was achieved in the modified gombisa, where drying occurred from bottom to top. In the traditional store, drying was much faster at the surface, with drying rate declining sharply with increasing depth in the bulk due to more limited air exchange. Relative humidity in the bulk center of the traditional structure remained above 90% for more than 4 weeks while in the modified gombisa it decreased progressively from the beginning of the trial. The results are promising and the modifications simple to implement, with the potential to effectively reduce post-harvest losses of maize. Field tests in Ethiopia are recommended.