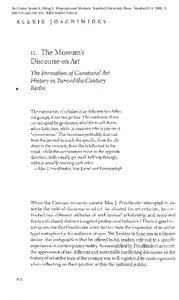 The Museum’s Discourse on Art

When the Cerman museum curator Max J. Friedländer attempted to describe the field of discourse in which he situated his art criticism, he confronted two different attitudes of art-historical scholarship and associated them with clearly distinct images of professional behavior. There is good reason to assume that Friedländer intended to create the impression of an archetypal metaphor for his audience of 1920. Yet, besides its function as a literary device, the juxtaposition that he offered to his readers referred to a specific experience in contemporary reality. As exemplified by Friedländer's account. the appearance of two different and potentially conflicting discourses on the history of art at the turn of the century was weil registered by contemporaries when reflecting on their position within the cultured public.