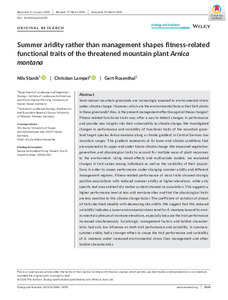 Semi‐natural mountain grasslands are increasingly exposed to environmental stress under climate change. However, which are the environmental factors that limit plants in these grasslands? Also, is the present management effective against these changes? Fitness‐related functional traits may offer a way to detect changes in performance and provide new insights into their vulnerability to climate change. We investigated changes in performance and variability of functional traits of the mountain grassland target species Arnica montana along a climate gradient in Central German low mountain ranges. This gradient represents at its lower end climate conditions that are expected at its upper end under future climate change. We measured vegetative, generative, and physiological traits to account for multiple ways of plant responses to the environment. Using mixed effects and multivariate models, we evaluated changes in trait values among individuals as well as the variability of their populations in order to assess performance under changing summer aridity and different management regimes. Fitness‐related performance of most traits showed strongly positive associations with reduced summer aridity at higher elevations, while only specific leaf area and leaf dry matter content showed no association. This suggests a higher performance level at less arid montane sites and that the physiological traits are less sensitive to this climate change factor. The coefficient of variation of almost all traits declined steadily with decreasing site aridity. We suggest that this reduced variability indicates a lower environmental stress level for A. montana toward its environmental optimum at montane elevations, especially because the trait performance increased simultaneously. Surprisingly, management factors and habitat characteristics had only low influence on both trait performance and variability. In summary, summer aridity had a stronger effect to shape the trait performance and variability of A. montana under increased environmental stress than management and other habitat characteristics.