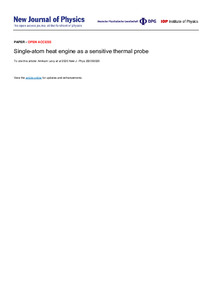 We propose employing a quantum heat engine as a sensitive probe for thermal baths. In particular, we study a single-atom Otto engine operating in an open thermodynamic cycle. Owing to its cyclic nature, the engine is capable of translating small temperature differences between two baths into a macroscopic oscillation in a flywheel. We present analytical and numerical modeling of the quantum dynamics of the engine and estimate it to be capable of detecting temperature differences as small as 2 μK. This sensitivity can be further improved by utilizing quantum resources such as squeezing of the ion motion. The proposed scheme does not require quantum state initialization and is able to detect small temperature differences in a wide range of base temperatures.