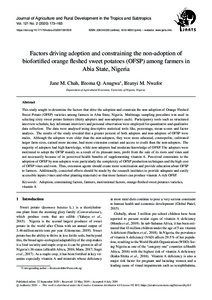 This study sought to determine the factors that drive the adoption and constrain the non-adoption of Orange Fleshed Sweet Potato (OFSP) varieties among farmers in Abia State, Nigeria. Multistage sampling procedure was used in selecting sixty sweet potato farmers (thirty adopters and non-adopters each). Participatory tools such as structured interview schedule, key informant interviews and personal observation were employed for quantitative and qualitative data collection. The data were analysed using descriptive statistical tools like, percentage, mean scores and factor analysis. The results of the study revealed that a greater percent of both adopters and non-adopters of OFSP were males. Although the adopters were older than the non-adopters, they were more educated, cosmopolite, cultivated larger farm sizes, earned more income, had more extension contact and access to credit than the non-adopters. The majority of adopters had high knowledge, while non-adopters had moderate knowledge of OFSP. The adopters were motivated to adopt the OFSP mainly as a result of its pleasant taste, profit from the sale of its roots and vines and not necessarily because of its perceived health benefits of supplementing vitamin A. Perceived constraints to the adoption of OFSP by non-adopters were particularly the complexity of OFSP production techniques and the high cost of OFSP vines and roots. Thus, extension agents should create more sensitisation and provide education about OFSP to farmers. Additionally, concerted eorts should be made by the research institutes to provide adequate and easily accessible inputs (vines and other planting materials) so that more farmers can produce vitamin A rich OFSP.