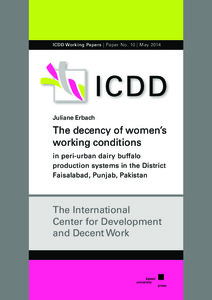 Equitable working conditions and fair payment for female workers are often lacking. To analyse the decency of women’s working conditions in dairy production systems in Pakistan, female workers (n=73) were asked about their on-farm activities in a semi-structured face to face interview. In addition, participatory research tools were applied to determine problems the women are facing. The research was carried out in 2011. The workload of female family members is enormous: it is the task of women to take care of the household, the children, and the livestock. Farm related activities are to clean the sheds, to prepare dungcakes and to water and feed the buffalo. Not only the high number of working hours – 16 hours per day –, but also heavy physical workload, are certainly undecent. From 73 interviewed women, 86.1% prepared dungcakes, 86.1% were feeding the buffaloes, 91.7% were in charge of cleaning the sheds and 65.3% were involved in milking the animals. More than two thirds (69.8%) of the interviewees related the harsh working conditions to negative impacts on their body condition.The results from two group discussions showed that the major problems of working women, caused by the working conditions, were lack of time and money, and health problems resulting from work. In most cases (n=47) the work was rendered in form of “unpaid family labour” while milk was mainly produced for subsistence, non commercial sale to neighbours or commercial sale to a milkman (dhodi). Female farm labourers also participated in the research (n=26). These women are also facing health problems and additionally they were complaining about inadequate payment. Most of these women (61.5%) were not getting paid money. Commonly, the labourers (88.5%, n=26) were compensated with non-monetary goods like dungcakes, milk, feed or food. Less than half of the female labourers (46.2%, n=26) received a monetary payment. The income of the labouring families was often below the extreme poverty line defined by the World Bank (WB, 2011a). The products, milk and dungcakes, are the main outputs of the women’s work and have a high value in use and in exchange. Milk is especially important for the subsistence oriented or subsistence and market oriented farms, as it provides protein and fat for the family. Dungcakes are the main source of fuel – nearly 90% (n=73) of the interviewed women used dungcakes for cooking purposes.The second part of this study aimed to determine if working conditions are decent or inadequate. As women mostly worked as unpaid family labour and rarely received an income, even as a labourer, payment was mostly inexistent or inadequate. The daily working hours of women on peri-urban dairy farms were, with an average of 12.1 h (n=72), very high compared to the payment or income. In 97.2% of the cases, working hours exceeded the number of decent working hours defined by the ILO (2002). Due to heavy workload, harsh weather conditions and absence of safety measures at work, women felt several negative impacts on their bodies. Overall, there was no social protection for women working on Pakistani farms. In some cases even bounded work occurred.From the study result it was concluded that women do not receive an equal payment compared to men, have fewer opportunities for education and have often no opportunity to invest and start their own business. In consequence, the work of family as well as hired female workers on dairy farms is undervalued in terms of payment, work time and the outcome of their on-farm activities. Overall, the working conditions of women working on dairy farms in the peri-urban area of Faisalabad are not decent.