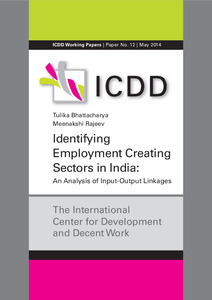 For a labour surplus economy like India employment generation remains a perennial concern. While growth of GDP is supposed to address this problem, not all sectors of the economy are equally employment intensive. This paper attempts to identify the relatively more employment generating sectors within the major sectors of the economy by considering both forward and backward linkages of the sectors. A linkage based analysis is considered useful as it shows the creation of employment within the sector concerned as well as in the related sectors through its direct and indirect linkages. Thus this paper is an attempt to identify the employment generating sectors in terms of their employment linkages under the Input-Output framework for the time periods 2003-04 and 2007-08(the most recent period). The analysis utilizes the data provided by the Central Statistical Organisation (CSO) on input-output matrix and appends this matrix by incorporating employment data from the national sample survey organization (NSSO) in India. By considering the broad sectors of the economy the exercise shows that while the share of in-house employment from agriculture is declining, its employment generation capability through linkages with other sectors of the economy is increasing. The next attempt is to go to a more disaggregated analysis of the sectors. The exercise is expected to provide important policy inputs for the state that is trying to achieve inclusive growth.