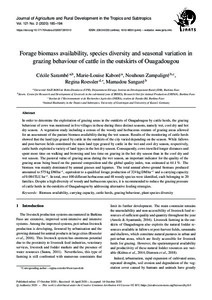 Forage biomass availability, species diversity and seasonal variation in grazing behaviour of cattle in the outskirts of Ouagadougou

In order to determine the exploitation of grazing areas in the outskirts of Ouagadougou by cattle herds, the grazing behaviour of cows was monitored in five villages in these during three distinct seasons, namely wet, cool dry and hot dry season. A vegetation study including a census of the woody and herbaceous stratum of grazing areas allowed for an assessment of the pasture biomass availability during the wet season. Results of the monitoring of cattle herds showed that the land type grazed by cattle in the outskirts of the city varied depending on the season. While fallows and post-harvest fields constituted the main land type grazed by cattle in the wet and cool dry season, respectively, cattle herds exploited a variety of land types in the hot dry season. Consequently, cows travelled longer distances and spent more time on walking and browsing and less time on grazing in the hot dry season than in the cool dry and wet season. The pastoral value of grazing areas during the wet season, an important indicator for the quality of the grazing areas being based on the pastoral composition and the global quality index, was estimated at 61.1 %. The biomass was mainly dominated by annual grasses and legumes. The total annual above-ground biomass produced amounted to 575 kg DM ha-1, equivalent to a qualified forage production of 324 kg DM ha-1 and a carrying capacity of 0.084 TLU ha-1. In total, over 100 different herbaceous and 48 woody species were identified, each belonging to 20 families. Despite a high diversity of woody and herbaceous species, it is recommended to reduce the grazing pressure of cattle herds in the outskirts of Ouagadougou by addressing alternative feeding strategies.