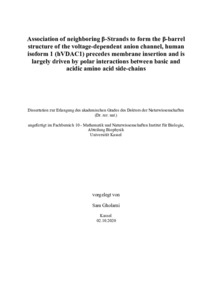 To date, all biophysical folding studies on β-barrel membrane proteins from outer membranes (OMPs) indicated a coupled mechanism of folding and membrane insertion. Most of these studies were performed with smaller OMPs from bacteria. Here we have investigated folding and insertion of a mitochondrial OMP, the voltage-dependent anion-selective channel (VDAC), human isoform 1 (hVDAC1). To examine whether folding and insertion are coupled for hVDAC1, the association of neighboring β-strands of the 19-stranded β-barrel of hVDAC1 was studied in the absence and in the presence of lipid bilayers. The formation of antiparallel β-strands and of the parallel β-strands 1 and 19 that close β-barrel were examined by site-directed fluorescence quenching. Based on a gene encoding a mutant of hVDAC1, in which the four native tryptophans (W) were replaced by phenylalanine and the two native cysteines (C) were replaced by alanine, several fluorescent single-C, single-W- hVDAC1 mutants (XnC-ZmW-FhVDAC1) were designed, expressed and isolated. The C and the W replaced residues X and Z, that were selected for their structural proximity at positions n and m in two adjacent β-strands of the β-barrel. The C was labeled with a nitroxide spin label, which is a short-range quencher of fluorescence. The association of the neighboring β-strands upon folding of hVDAC1 was then investigated by intramolecular quenching of the tryptophan (W) -fluorescence by the nitroxide-label covalently linked to the SH-group of the C. Fluorescence spectroscopy demonstrated that contacts between neighboring β-strands are not observed for the urea-denatured mutants of hVDAC1. Regardless of its folding state and environment (unfolded in 8 M urea, in aqueous buffer after urea dilution, in detergent micelles or lipid bilayers), contacts were also never observed for another mutant used as a negative control, I138C-L275W-FhVDAC1, in which C and W are in β-strands 9 and 19 and thus neither in neighbor strands nor in structural proximity. In contrast, all specifically designed mutants of hVDAC1 that contain W and C in proximity in the high-resolution structure, formed an aqueous intermediate with a native-like β-barrel structure as indicated by intramolecular site-directed fluorescence quenching and CD spectroscopy. The fluorescence quenching in these aqueous intermediates formed after urea-dilution was very similar to the fluorescence quenching of the mutants folding and insertion into lipid bilayers, indicating that in contrast to previous observations for bacterial OMPs, the β-barrel of hVDAC1 is largely formed already in the aqueous folding intermediate in the absence of lipid or detergent.