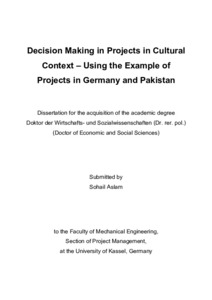 This study presents the investigation about the decision making styles of German and Pakistani managers in national cultural context who have been working on projects. It becomes very important to understand the national culture when doing the international projects. Different studies have shown that national culture has significant impact upon managerial practices especially decision making. Germany is a developed country and various German companies perform projects in developing countries like Pakistan. In projects, the results are the output of the effective and efficient work of project teams. Understanding the cultural values and decision making styles of one another may be a catalyst for productivity in international projects. This understanding enhances the mutual cooperation and reduces the likelihood of potential conflicts.
In this study, the decision making styles of both German and Pakistani individuals involved in project activities have been investigated in social and cognitive context. The cultural differences have been estimated and compared for the managers belonging to both countries. The project work is generally performed through project teams. Therefore, the relationship of decision styles in social context has been estimated with dimensions of national culture using an etic approach to study national culture. These decision styles are: autocratic; pseudo-consultative; consultative; participative; pseudo-participative; and delegative. The dimensions of national culture are: power distance; uncertainty avoidance; collectivism / individualism; masculinity / femininity; and long term / short term orientation. Decision styles in cognitive context are: directive; analytical; conceptual; and behavioral. For estimation of these decision styles and cultural dimensions three already developed scales have been used. Regarding the analysis of the data, two softwares (SPSS 21 and SmartPLS3) have been used.
Pakistanis have been found more autocratic as compared to Germans. For other styles, Pakistanis are more pseudo-consultative and more pseudo-participative. Germans are more participative and delegative as compared to Pakistani managers. The analysis of relationship of cultural dimensions with decision styles in social context has also revealed that power distance (PD) and masculinity (MAS) have the ability to strongly influence the decision making styles autocratic, pseudo-consultative and pseudo-participative in a positive direction for Pakistani managers working in projects. Power distance (PD) has shown a significant and negative relationship with participative decision making style. Whereas, in the German sub-sample power distance (PD) does not show a very dominant role. This dimension has a positive relationship with consultative decision style only. It means that these people consult others in decision making process. Among the other cultural dimensions, masculinity (MAS) has shown a positive relationship with pseudo-consultative and delegative styles. This positive relationship of masculinity and delegative style among Germans pretends that although they might be more masculine yet they have propensity to delegate the decision authority. Structural equation modelling has been per-formed to evaluate the relationships of cultural dimensions and decision styles in social context.
Regarding the decision styles in cognitive context, Pakistani managers demonstrate more dominance as compared to German managers in directive and behavioral decision making styles. Whereas for the other two styles the German managers present their dominance as more analytical and conceptual. These differences have been found significant by applying independent sample t-test.
This study also presents some qualitative data and its analysis. Different factors at personal and organizational level as well as factors related to general environment have been also explored and discussed in qualitative section. The findings of this study propose that when German and Pakistani managers have to work jointly in common projects then differences in decision making styles in cultural context should be considered. For the tasks, where less consultation, participation and analysis is required, speedy and routine decisions are to be taken and need for creativity is low, Pakistani project managers may be suitable. German managers will be appropriate on those managerial positions where more consultation and participation is requisite, the need for creativity and innovation is high, and the tasks to be decided are composite and need more analytical and conceptual analysis.