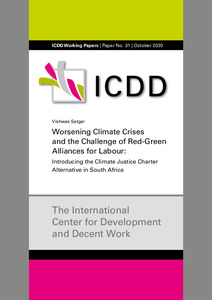 The world is running out of time to prevent catastrophic climate change. In South Africa grassroots campaigning by the South African Food Sovereignty over the past six years, during the worst drought in the history of the country, produced a Climate Justice Charter (CJC). This CJC is unique in the world and is serving as the basis to build convergences between unions committed to a deep just transition and wider climate justice forces. It is laying the basis for red-green alliances to drive the deep just transition from below and constitute a climate justice project for the country. Many challenges face this process but crucial catalytic steps have been taken, with immense potential, to remake climate justice politics. This working paper serves as an introduction to the South African CJC and the systemic alternatives it is advancing. The CJC is included as an annexure to serve as a political resource for innovation and further development as unions attempt to build red-green alliances in other parts of the world to decarbonize and adapt their societies in the interests of the most vulnerable.