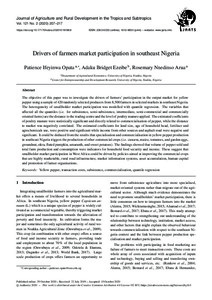 The objective of this paper was to investigate the drivers of farmers’ participation in the output market for yellow pepper using a sample of 420 randomly selected producers from 8,500 farmers in selected markets in southeast Nigeria. The heterogeneity of smallholder market participation was modelled with quantile regression. The variables that affected all the quantiles (i.e. for subsistence, semi-subsistence, intermediate, semi-commercial and commercially oriented farms) are the distance to the trading centre and the level of poultry manure applied. The estimated coefficients of poultry manure were statistically significant and directly related to commercialisation of pepper, while the distance to market was negatively correlated. The estimated coefficients for land size, age of household head, fertiliser and agrochemicals use, were positive and significant while income from other sources and asphalt road were negative and significant. It could be deduced from the results that specialisation and commercialisation in yellow pepper production in southeast Nigeria triggers the production of other commercial crops (i.e. cassava, maize, tomatoes, and garden eggs, groundnut, okra, fluted pumpkin, amaranth, and sweet potatoes). The findings showed that volume of pepper sold and total farm production and consumption were indicators for household food security and income. These suggest that smallholder market participation in West Africa could be driven by policies aimed at improving the commercial crops that are highly marketable, rural road infrastructure, market information systems, asset accumulation, human capital and promotion of farmer organisations.