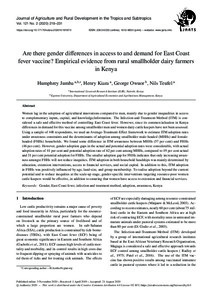 Are there gender differences in access to and demand for East Coast fever vaccine? Empirical evidence from rural smallholder dairy farmers in Kenya

Women lag in the adoption of agricultural innovations compared to men, mainly due to gender inequalities in access to complementary inputs, capital, and knowledge/information. The Infection-and-Treatment-Method (ITM) is considered a safe and effective method of controlling East Coast fever. However, since its commercialisation in Kenya differences in demand for this vaccine among smallholder men and women dairy cattle keepers have not been assessed. Using a sample of 448 respondents, we used an Average-Treatment-Effect framework to estimate ITM adoption rates under awareness constraints and the determinants of adoption among smallholder male-headed (MHHs) and female-headed (FHHs) households. We found some difference in ITM awareness between MHHs (57 per cent) and FHHs (46 per cent). However, gender adoption gaps in the actual and potential adoption rates were considerable, with actual adoption rates of 41 per cent and potential adoption rate of 62 per cent among MHHs, compared to 19 per cent actual and 31 per cent potential adoption for FHHs. The smaller adoption gap for FHHs indicates that only increasing awareness amongst FHHs will not reduce inequities. ITM adoption in both household headships was mainly determined by education, extension interventions, access to financial services, and social capital. In addition to this, ITM adoption in FHHs was positively influenced by age, land-size, and group membership. To realise adoption beyond the current potential and to reduce inequities at the scale-up stage, gender-specific interventions targeting resource-poor women cattle keepers would be effective, in addition to ensuring that women have access to extension and financial services.