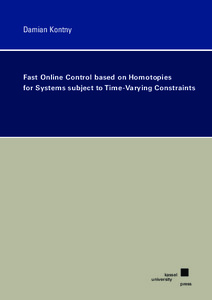 The integration of intelligent, autonomously acting systems into modern society is a rapidly growing field. After robots are established for simple, recurring processes in industry and everyday life, more complex tasks are of interest which require the systems to consider the environment in their decision making process. In the future, intelligent systems will get access to fields like autonomous driving cars, unmanned aerial vehicle (UAV), manufacturing processes, household, or the assistance to people in need of care. The fast calculation of optimal circumventing trajectories is therefore an essential component to be able to integrate intelligent systems into our environment at all. The ambitious goal of real-time interaction between a human and an autonomous system is challenging. An autonomous system has to react timely on human motion such that a real interaction can be established. Thus, the autonomous system must continuously capture its environment and adapt its solution. If the system additionally determines a solution with respect to a certain optimization criterion, the computation times quickly rise, and real-time capability moves far away. To solve this problem, the thesis proposes an algorithmic control procedure which determines optimal collision-free trajectories fast. Therefore, a concept which uses homotopy properties in the control procedure is introduced. This allows to determine near-optimal solutions much faster than by commonly used techniques. At the beginning, an algorithmic procedure is shown for linear systems. It selects an optimized, circumventing trajectory based on the current obstacle location, and adapts its trajectory when the obstacle moves. Since real physical systems always underlie actuator limitations like e.g. motor torques, the provided method also considers input constraints. The developed method is subsequently extended to consider predictions of a moving obstacle. Thus, the procedure can further reduce the costs of the executed trajectory and is able to detect and avoid a collision at an early stage. Since many real-world system are described by nonlinear dynamics, the introduced method is also extended to nonlinear systems. The effectiveness of the proposed approach is shown in several simulations. Motivated by the results, the developed approach is extended to more complex tasks, like the collision avoidance between geometric bodies, and to multi agent systems that cooperatively determine solution trajectories in real-time, by means of the homotopy properties. Simulation results of a collision avoidance scenario for a robotic manipulator show, that with the proposed technique good results can be obtained in real-time.