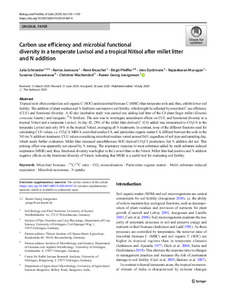 Tropical soils often contain less soil organic C (SOC) and microbial biomass C (MBC) than temperate soils and, thus, exhibit lower soil fertility. The addition of plant residues and N fertilizers can improve soil fertility, which might be reflected by microbial C use efficiency (CUE) and functional diversity. A 42-day incubation study was carried out, adding leaf litter of the C4 plant finger millet (Eleusine coracana Gaertn.) and inorganic 15N fertilizer. The aim was to investigate amendment effects on CUE and functional diversity in a tropical Nitisol and a temperate Luvisol. At day 42, 28% of the millet litter-derived C (C4) added was mineralised to CO2C4 in the temperate Luvisol and only 18% in the tropical Nitisol, averaging all N treatments. In contrast, none of the different fractions used for calculating CUE values, i.e. CO2C4, MBC4, microbial residue C4, and particulate organic matter C4, differed between the soils in the N0 (no N addition) treatment. CUE values considering microbial residues varied around 0.63, regardless of soil type and sampling day, which needs further evaluation. Millet litter increased autochthonous SOC-derived CO2C3 production, but N addition did not. This priming effect was apparently not caused by N mining. The respiratory response to most substrates added by multi-substrate-induced respiration (MSIR) and, thus, functional diversity was higher in the Luvisol than in the Nitisol. Millet litter had positive and N addition negative effects on the functional diversity of Nitisol, indicating that MSIR is a useful tool for evaluating soil fertility.