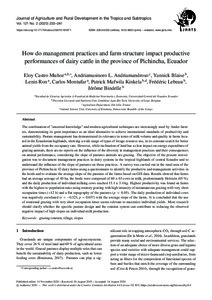 How do management practices and farm structure impact productive performances of dairy cattle in the province of Pichincha, Ecuador

The combination of "ancestral knowledge" and modern agricultural techniques are increasingly used by Andes farmers, demonstrating its great importance as an ideal alternative to achieve international standards of productivity and sustainability. Pasture management has demonstrated its relevance in terms of milk volume and quality in farms located in the Ecuadorian highlands, showing a wide range of types of forage resource use, in its constant search for better animal yields from the occupancy rate. However, while inclination of land has a clear impact on energy expenditure of grazing animals, there are no reports on the influence of the diversity in management practices and their consequences on animal performance, considering the slope of pastures animals are grazing. The objective of the present investigation was to document management practices in dairy systems in the tropical highlands of central Ecuador and to understand the influence of the slope of pastures on those practices. A survey was carried out in the rural area of the province of Pichincha in 42 dairy farms using a questionnaire to identify the productive and management activities in the herds and to evaluate the average slope of the pastures of the farms based on GIS data. Results showed that farms had an average acreage of 40 ha, the herds were composed of 60 ± 63 cows in milk, predominantly Holstein (65 %), and the daily production of individual milking cows reached 15.1 ± 3.4 kg. Highest productivity was found on farms with the highest re-population rates using rotatory grazing with high intensity of instantaneous grazing with very short occupation times (<12 h) and a flat topography of the pastures (p >< 0.05). The daily production of individual cows was negatively correlated (r = −0.323, p = 0.037) with the average slope of the farms. It is concluded that the use of rotational grazing with very short occupation times seems relevant to maximize individual yields. More research should clarify whether the specific pasture design and the rotation system can contribute to reducing the observed negative impact of high slopes on individual milk production.