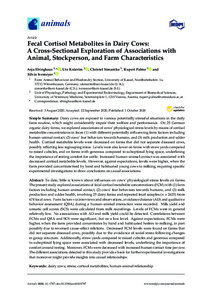 To date, little is known about influences on cows’ physiological stress levels on farms. The present study explored associations of fecal cortisol metabolite concentrations (FCM) with (1) farm factors including human–animal contact, (2) cows’ fear behaviors towards humans, and (3) milk production and udder health, involving 25 dairy farms and repeated fecal samples (n = 2625) from 674 focal cows. Farm factors via interviews and observations, avoidance distance (AD) and qualitative behavior assessment (QBA) during a human–animal interaction were recorded. Milk yield and somatic cell scores (SCS) were calculated from milk recordings. Levels of FCMs were in general relatively low. No associations with AD and milk yield could be detected. Correlations between FCMs and QBA and SCS were significant, but on a low level. Against expectations, FCMs were higher, when the farm provided concentrates by hand and habituated heifers to milking, in part possibly due to reversed cause–effect relations. Decreased FCM levels were found on farms that did not separate diseased cows, possibly due to the avoidance of social stress following changes in group structure. Additionally, straw yards compared to raised cubicles and generous compared to suboptimal lying space were associated with decreased levels, underlining the importance of comfort around resting. Moreover, FCMs were decreased with increased human contact time per cow. The different associations detected in this study provide a basis for further experimental investigations that moreover might provide insights into causal relationships.