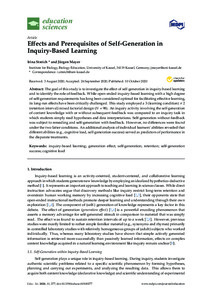 Effects and Prerequisites of Self-Generation in Inquiry-Based Learning

The goal of this study is to investigate the effect of self-generation in inquiry-based learning and to identify the role of feedback. While open-ended inquiry-based learning with a high degree of self-generation requirements has long been considered optimal for facilitating effective learning, its long-run effects have been critically challenged. This study employed a 3 (learning condition) × 2 (retention interval) mixed factorial design (N = 98). An inquiry activity involving the self-generation of content knowledge with or without subsequent feedback was compared to an inquiry task in which students simply read hypotheses and data interpretations. Self-generation without feedback was subject to rereading and self-generation with feedback. However, no differences were found under the two latter conditions. An additional analysis of individual learners’ abilities revealed that different abilities (e.g., cognitive load, self-generation success) served as predictors of performance in the disparate treatments.