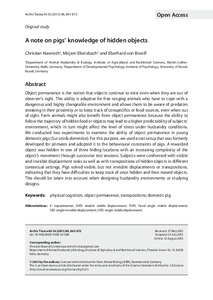 A note on pigs’ knowledge of hidden objects

Object permanence is the notion that objects continue to exist even when they are out of observer´s sight. This ability is adaptive not only for free ranging animals who have to cope with a dangerous and highly changeable environment, allowing them to be aware of predators sneaking in their proximity or to keep track of conspecifics or food sources, even when out of sight. Farm animals, too, might profit from object permanence as the ability to follow the trajectory of hidden food or objects may lead to a higher predictability of subjects' environment, which in turn might affect the level of stress under husbandry conditions. We conducted two experiments to examine the ability of object permanence in young domestic pigs (Sus scrofa domestica). For this purpose we used a test setup that was formerly developed for primates and adopted it to the behavioural constraints of pigs. A rewarded object was hidden in one of three hiding locations with an increasing complexity of the objects movement through successive test sessions. Subjects were confronted with visible and invisible displacement tasks as well as with transpositions of hidden objects in different contextual settings. Pigs solved visible, but not invisible displacements or transpositions, indicating that they have difficulties to keep track of once hidden and then moved objects. This should be taken into account when designing husbandry environments or study designs.