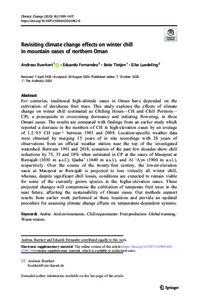 For centuries, traditional high-altitude oases in Oman have depended on the cultivation of deciduous fruit trees. This study explores the effects of climate change on winter chill (estimated as Chilling Hours—CH and Chill Portions—CP), a prerequisite to overcoming dormancy and initiating flowering, in three Omani oases. The results are compared with findings from an earlier study which reported a decrease in the numbers of CH in high-elevation oases by an average of 1.2–9.5 CH year−1 between 1983 and 2008. Location-specific weather data were obtained by merging 15 years of in situ recordings with 28 years of observations from an official weather station near the top of the investigated watershed. Between 1991 and 2018, scenarios of the past few decades show chill reductions by 75, 35 and 18% when estimated in CP at the oases of Masayrat ar Ruwajah (1030 m a.s.l.), Qasha’ (1640 m a.s.l.), and Al ‘Ayn (1900 m a.s.l.), respectively. Over the course of the twenty-first century, the lowest-elevation oasis at Masayrat ar Ruwajah is projected to lose virtually all winter chill, whereas, despite significant chill losses, conditions are expected to remain viable for some of the currently grown species in the higher-elevation oases. These projected changes will compromise the cultivation of temperate fruit trees in the near future, affecting the sustainability of Omani oases. Our methods support results from earlier work performed at these locations and provide an updated procedure for assessing climate change effects on temperature-dependent systems.