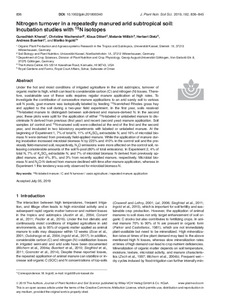 Under the hot and moist conditions of irrigated agriculture in the arid subtropics, turnover of organic matter is high, which can lead to considerable carbon (C) and nitrogen (N) losses. Therefore, sustainable use of these soils requires regular manure application at high rates. To investigate the contribution of consecutive manure applications to an arid sandy soil to various soil N pools, goat manure was isotopically labeled by feeding 15N‐enriched Rhodes grass hay and applied to the soil during a two‐year field experiment. In the first year, soils received 15N‐labeled manure to distinguish between soil‐derived and manure‐derived N. In the second year, these plots were split for the application of either 15N‐labeled or unlabeled manure to discriminate N derived from previous (first year) and recent (second year) manure application. Soil samples (of control and 15N‐manured soil) were collected at the end of the first and the second year, and incubated in two laboratory experiments with labeled or unlabeled manure. At the beginning of Experiment 1, 7% of total N, 11% of K2SO4 extractable N, and 16% of microbial biomass N were derived from previously field‐applied manure. While the application of manure during incubation increased microbial biomass N by 225% and 410% in the control soil and the previously field‐manured soil, respectively, N2O emissions were more affected on the control soil, releasing considerable amounts of the soil N‐pool (80% of total emissions). In Experiment 2, 4% of total N, 7% of K2SO4 extractable N, and 7% of microbial biomass N derived from previously applied manure, and 4%, 8%, and 3% from recently applied manure, respectively. Microbial biomass N and N2O‐N derived from manure declined with time after manure application, whereas in Experiment 1 this tendency was only observed for microbial biomass N.