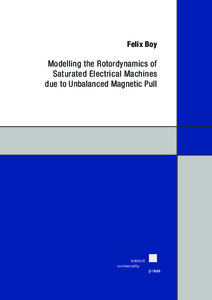 In the design of modern electrical drives a trend towards higher speeds and lighter structures can be observed. While increasing the power density this trend also implies stronger vibration issues. Among these phenomena lateral rotor oscillations due to unbalanced magnetic pull are of particular interest: strong lateral vibrations may lead to rotor-stator contact destroying the system in extreme cases. In this work an electromechanical model is established to describe such rotordynamic vibrations. It is applicable to all kinds of rotating field machines and captures arbitrary transient states. The model describes both currents and rotor motion in a fully coupled manner. It accounts for higher harmonics in the air-gap flux density, magnetic saturation and parallel branches in the winding. The model is validated by comparing it to finite element simulations, measurements and space vector models. The examples chosen are a cage induction machine and an permanent magnet synchronous machine. Using the model self-excited rotor oscillations have been investigated. Based on several simulation studies simple formulae for critical speeds concerning these vibrations have been established.