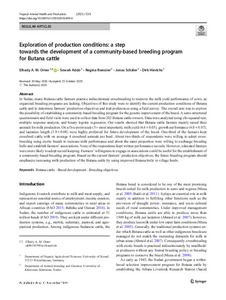 Exploration of production conditions: a step towards the development of a community-based breeding program for Butana cattle

In Sudan, many Butana cattle farmers practice indiscriminate crossbreeding to improve the milk yield performance of cows, as organized breeding programs are lacking. Objectives of this study were to identify the current production conditions of Butana cattle and to determine farmers’ production objectives and trait preferences using a field survey. The overall aim was to explore the possibility of establishing a community-based breeding program for the genetic improvement of the breed. A semi-structured questionnaire and field visits were used to collect data from 202 Butana cattle owners. Data were analyzed using chi-squared test, multiple response analysis, and binary logistic regression. Our results showed that Butana cattle farmers mainly raised their animals for milk production. On a five-point scale (5 = most important), milk yield (4.6 ± 0.05), growth performance (4.0 ± 0.07), and lactation length (3.9 ± 0.08) were highly preferred for future development of the breed. One-third of the farmers kept crossbred cattle with on average 4 crossbred animals per herd. About two-thirds of respondents were willing to adopt crossbreeding using exotic breeds to increase milk performance and about the same proportion were willing to exchange breeding bulls and establish farmers’ associations. None of the respondents kept written performance records. However, educated farmers were more likely to adopt record keeping. Farmers’ willingness to engage in associations could be useful for the establishment of a community-based breeding program. Based on the current farmers’ production objectives, the future breeding program should emphasize increasing milk production of the Butana cattle by using improved Butana bulls in village herds.