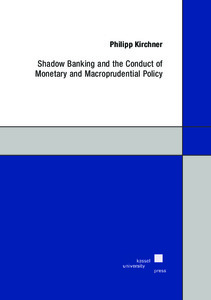 Shadow Banking and the Conduct of Monetary and Macroprudential Policy

Since the occurrence of the Great Financial Crisis (GFC) in 2007/2008, our understanding of (macro) economics changed fundamentally. The evolution of the GFC revealed fundamental changes in the structural composition of financial systems in that traditional retail banking services, especially in the U.S., shifted progressively into a market-based banking system called the shadow banking system. Consequently, policy makers were forced to adapt the existing toolkit in two ways: implementing unconventional monetary measures to stimulate markets and introducing macroprudential measures as laid down in the BASEL III-framework geared towards the resilience and stability of the financial sector. This thesis addresses these aspects by using state-of-the-art closed- and open-economy dynamic stochastic general equilibrium models to analyze the impact of shadow banking on the business cycle and on the interaction with monetary and macroprudential policy measures.