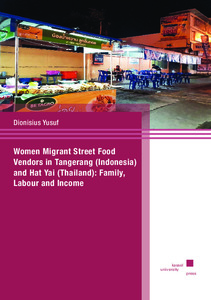 The present study deals with the issues of family, income, livelihoods, and the patterns of employment of women migrants in the street food sector in Indonesia and Thailand. Based on a sample of 200 women street food vendors in Tangerang city and 96 in Hat Yai city the study employed a variety of methods in gathering the data. The cities were specifically selected due to rapidly increasing numbers of street food vendors. To select the respondents, purposive sampling technique was used. The "triangulation" research approach was adapted in which survey questionnaires, personal interviews (biography interviews) and observations of the researcher were used to collect data. 14 vendors from Tangerang and six vendors from Hat Yai were enlisted as research participants for biographical interviews. Quantitative data was analyzed using percentages, bivariate analysis, Pearson and Chi‐square analysis.