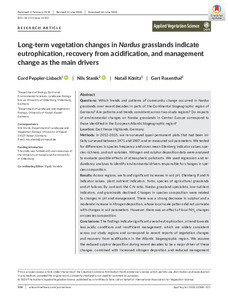 Questions
Which trends and patterns of community change occurred in Nardus grasslands over recent decades in parts of the Continental biogeographic region of Germany? Are patterns and trends consistent across two study regions? Do impacts of environmental changes on Nardus grasslands in Central Europe correspond to those identified in the European Atlantic biogeographic region?

Methods
In 2012–2015, we re‐surveyed quasi‐permanent plots that had been initially surveyed between 1971 and 1987, and re‐measured soil parameters. We tested for differences in species frequency and cover, mean Ellenberg indicator values, species richness, and soil variables. Nitrogen and sulphur deposition data were analysed to evaluate possible effects of atmospheric pollutants. We used regression and redundancy analyses to identify environmental drivers responsible for changes in species composition.

Results
Across regions, we found significant increases in soil pH, Ellenberg R and N indicator values, plant nutrient indicators, forbs, species of agricultural grasslands and of fallows. By contrast, the C:N ratio, Nardus grassland specialists, low‐nutrient indicators, and graminoids declined. Changes in species composition were related to changes in pH and management. There was a strong decrease in sulphur and a moderate increase in nitrogen deposition, whose local‐scale pattern did not correlate with changes in soil parameters. However, there was an effect of local NHy changes on species composition.

Conclusions
The findings indicate significant overall eutrophication, a trend towards less acidic conditions and insufficient management, which are widely consistent across our study regions and correspond to recent reports of vegetation changes and recovery from acidification in the Atlantic biogeographic region. We assume the reduced sulphur deposition during recent decades to be a major driver of these changes, combined with increased nitrogen deposition and reduced management intensity. This suggests a large‐scale validity of processes that influenced changes in Nardus grasslands of Western and Central Europe.

Except where otherwise noted, this item's license is described as Namensnennung-Nicht-kommerziell 4.0 International