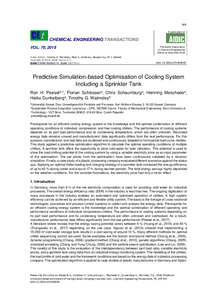 Predictive Simulation-based Optimisation of Cooling System Including a Sprinkler Tank

Prerequisite for an efficient cooling energy system is the knowledge and the optimal combination of different operating conditions of individual compression and free cooling chillers. The performance of cooling systems depends on its part load performance and its condensing temperature, which are often unknown. Recorded energy data remains unused and manufacturers' data significantly differs from the real performance. For this purpose, manufacturer and real data are combined and continuously adapted to form partial load curve models.
This study applied a predictive optimization algorithm to calculate the optimal operating conditions of multiple chillers. A sprinkler tank offers the opportunity to store cold-water for later utilisation. This potential is used to show the load shifting potential of the cooling system by using a variable electricity price as an input paramete of the optimisation. The set points from the optimisation have been continuously validated by a dynamic simulation. Finally, a case study of a plastic processing company evaluated different scenarios against the status quo. Applying an optimal chiller loading and charging strategy of a sprinkler tank increased the energy efficiency of up to 40 % during colder and around 17% during warmer periods. The total energy savings highly depended on the weather conditions. For the consider fluctuations, the electricity price had only a minor effect.