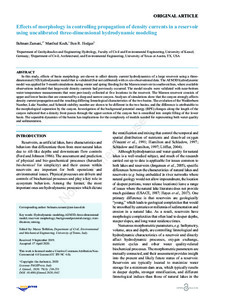 (Effects of morphology in propagation of density currents)

In this study, effects of basin morphology are shown to affect density current hydrodynamics of a large reservoir using a three-dimensional (3D) hydrodynamic model that is validated (but not calibrated) with in situ observational data. The AEM3D hydrodynamic model was applied for 5-month simulations during winter and spring flooding for the Maroon reservoir in southwest Iran, where available observations indicated that large-scale density currents had previously occurred. The model results were validated with near-bottom water temperature measurements that were previously collected at five locations in the reservoir. The Maroon reservoir consists of upper and lower basins that are connected by a deep and narrow canyon. Analyses of simulations show that the canyon strongly affects density current propagation and the resulting differing limnological characteristics of the two basins. The evolution of the Wedderburn Number, Lake Number, and Schmidt stability number are shown to be different in the two basins, and the difference is attributable to the morphological separation by the canyon. Investigation of the background potential energy (BPE) changes along the length of the canyon indicated that a density front passes through the upper section of the canyon but is smoothed into simple filling of the lower basin. The separable dynamics of the basins has implications for the complexity of models needed for representing both water quality and sedimentation.

Except where otherwise noted, this item's license is described as Namensnennung-Nicht-kommerziell 4.0 International