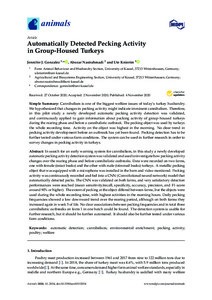 Abstract
In search for an early warning system for cannibalism, in this study a newly developed automatic pecking activity detection system was validated and used to investigate how pecking activity changes over the rearing phase and before cannibalistic outbreaks. Data were recorded on two farms, one with female (intact beaks) and the other with male (trimmed beaks) turkeys. A metallic pecking object that was equipped with a microphone was installed in the barn and video monitored. Pecking activity was continuously recorded and fed into a CNN (Convolutional neural network) model that automatically detected pecks. The CNN was validated on both farms, and very satisfactory detection performances were reached (mean sensitivity/recall, specificity, accuracy, precision, and F1-score around 90% or higher). The extent of pecking at the object differed between farms, but the objects were used during the whole recording time, with highest activities in the morning hours. Daily pecking frequencies showed a low downward trend over the rearing period, although on both farms they increased again in week 5 of life. No clear associations between pecking frequencies and in total three cannibalistic outbreaks on farm 1 in one batch could be found. The detection system is usable for further research, but it should be further automated. It should also be further tested under various farm conditions.