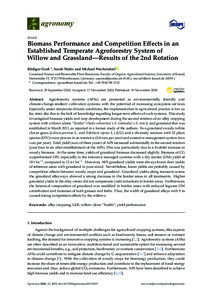 Agroforestry systems (AFSs) are promoted as environmentally friendly and climate-change-resilient cultivation systems with the potential of increasing ecosystem services. Especially under temperate climatic conditions, the implementation in agricultural practice is low so far, inter alia due to the lack of knowledge regarding longer-term effects of such systems. This study investigated biomass yields and crop development during the second rotation of an alley cropping system with willows (clone “Tordis” ((Salix schwerinii x S. viminalis) x S. vim.)) and grassland that was established in March 2011, as reported in a former study of the authors. Two grassland swards (white clover grass (Lolium perenne L. and Trifolium repens L.) (CG) and a diversity mixture with 32 plant species (DIV)) were proven in an intensive (3/4 cuts per year) and extensive management system (two cuts per year). Total yield (sum of three years) of AFS increased substantially in the second rotation (year four to six after establishment of the AFS). This was particularly due to a fivefold increase in woody biomass. At the same time, yields of grassland biomass decreased slightly. Biomass of CG outperformed DIV, especially in the intensive managed systems with a dry matter (DM) yield of 18 t ha−1, compared to 12.6 t ha−1. However, AFS grassland yields were always lower than yields of reference areas with grassland in pure stand. Nevertheless, lower yields are probably caused by competition effects between woody crops and grassland. Grassland yields along transects across the grassland alleyways showed a strong decrease in the border areas in all treatments. Higher grassland yields in the alley center did not compensate yield reductions in border areas. Furthermore, the botanical composition of grassland was modified in border areas with reduced legume DM contribution and increases of both grasses and forbs. Thus, the width of grassland alleys with 9 m caused strong competition effects by the willows.