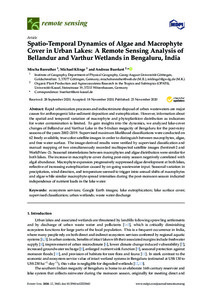 Spatio-Temporal Dynamics of Algae and Macrophyte Cover in Urban Lakes: A Remote Sensing Analysis of Bellandur and Varthur Wetlands in Bengaluru, India

Rapid urbanization processes and indiscriminate disposal of urban wastewaters are major causes for anthropogenic lake-sediment deposition and eutrophication. However, information about the spatial and temporal variation of macrophyte and phytoplankton distribution as indicators for water contamination is limited. To gain insights into the dynamics, we analyzed lake-cover changes of Bellandur and Varthur Lake in the S-Indian megacity of Bengaluru for the post-rainy seasons of the years 2002–2019. Supervised maximum likelihood classifications were conducted on 62 freely available, true-color satellite images in order to distinguish between macrophytes, algae, and free water surface. The image-derived results were verified by supervised classification and manual mapping of two simultaneously recorded multispectral satellite images (Sentinel-2 and WorldView-2). Seasonal interrelations between macrophytes and algae distribution were similar for both lakes. The increase in macrophyte cover during post-rainy season negatively correlated with algal abundance. Macrophyte expansion progressively suppressed algae development at both lakes, reflective of increasing eutrophication caused by on-going wastewater input. Seasonal variation in precipitation, wind direction, and temperature seemed to trigger intra-annual shifts of macrophytes and algae while similar macrophyte spread intensities during the post-monsoon season indicated independence of nutrient loads in the lake water.