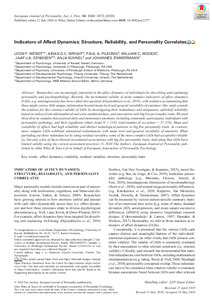 Researchers are increasingly interested in the affect dynamics of individuals for describing and explaining personality and psychopathology. Recently, the incremental validity of more complex indicators of affect dynamics (IADs; e.g. autoregression) has been called into question (Dejonckheere et al., 2019), with evidence accumulating that these might convey little unique information beyond mean level and general variability of emotions. Our study extends the evidence for the construct validity of IADs by investigating their redundancy and uniqueness, split‐half reliability based on indices from odd‐numbered and even‐numbered days, and association with big five personality traits. We used three diverse samples that assessed daily and momentary emotions, including community participants, individuals with personality pathology, and their significant others (total N = 1192, total number of occasions = 51 278). Mean and variability of affects had high reliability and distinct nomological patterns to big five personality traits. In contrast, more complex IADs exhibited substantial redundancies with mean level and general variability of emotions. When partialing out these redundancies by using residual variables, some of the more complex IADs had acceptable reliability, but only a few of these showed incremental associations with big five personality traits, indicating that IADs have limited validity using the current assessment practices.