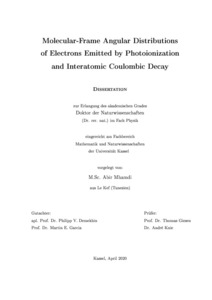 The continuous refinement of the experimental and theoretical methods to study the electron angular emission distributions, and particularly in a molecule frame of reference, have contributed to a keen understanding of the structure of molecules and have provided deeper insight into fundamental physical phenomena.
Revealing many details of the ionization dynamics, the molecular-frame angular distributions (MFADs) of emitted electrons have been an appealing research topic for the last two decades. Owing to the interesting physics taking place within few tens of electron volts above the ionization thresholds of molecules, the MFADs have mainly been studied in the low-energy regime. In addition, a broad interest has been devoted to the interatomic Coulombic decay (ICD) since its prediction in the late 1990s. This process appears to prevail everywhere as an ultrafast mechanism by which energy can be transferred from a given center to its environment. Presently, few studies have explored the MFADs of the ICD electrons, and thus very little is known about their angle-resolved spectra.
The present work aims at theoretically investigating the MFADs of electrons emitted by photoionization and interatomic Coulombic decay from small linear molecules. To this end, the electron discrete and continuum spectra in the investigated molecules were computed using the stationary Single Center method which is known to be a powerful tool for studying the angle-resolved ionization of molecules. The first part of this work concerns the examination of the quantum nature of valence holes in Ne2, and the core holes in CO2. Furthermore, smooth transformations of the MFADs in CO and N2 for photoelectron energies ranging between 10 and 1000 eV are studied. The second part is devoted to the investigation of the MFADs of ICD electrons in four noble gas dimers.
In Ne2, the influence of a spectator electron on the MFADs of resonant ICD electrons is examined. For HeNe, the present theoretical study provides unambiguous assignments of two different decay channels. Lastly, in He2 and NeAr, the present theory explores the strong dependence of the MFADs of ICD electrons on the electronic properties of the decaying states. This research work is the fruit of a close collaboration between theory and experiment.