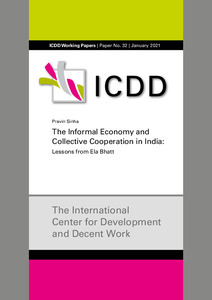 The Informal Economy and Collective Cooperation in India: Lessons from Ela Bhatt

Increasing informality and inequality have been recognised as the two primary outcomes of the twenty-first century globalisation. With growing intensity of the two problems, the world seems to be returning to the nineteenth-century precarious conditions in the world of work. Absence of judiciable status of the worker in informal economy has caused widespread violations of workers’ rights. Consequently, all the protective legislations and ILO standards have failed to extend the desired protection to informal workers, amongst whom the presence of women is dominant, more so in countries of the Global South. Mahatma Gandhi’s philosophy of ‘Trusteeship’ functional on the principle of classless cooperation that has proved successful, particularly among women self-employed workers, needs to be examined and emulated. The practice of ‘collective cooperation’ as against ‘collective bargaining’ has not only led to the establishment of harmonious relationship between capital and labour, but has also enabled the SEWA entrepreneurs to work towards securing decent conditions of work with justifiable returns. As collective bargaining is the central principle of social dialogues in a formal economy, collective cooperation ought to become the basic rule for informal economy.