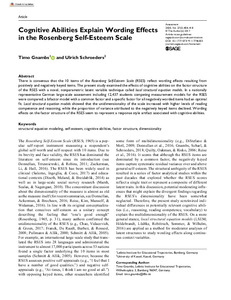 There is consensus that the 10 items of the Rosenberg Self-Esteem Scale (RSES) reflect wording effects resulting from positively and negatively keyed items. The present study examined the effects of cognitive abilities on the factor structure of the RSES with a novel, nonparametric latent variable technique called local structural equation models. In a nationally representative German large-scale assessment including 12,437 students competing measurement models for the RSES were compared: a bifactor model with a common factor and a specific factor for all negatively worded items had an optimal fit. Local structural equation models showed that the unidimensionality of the scale increased with higher levels of reading competence and reasoning, while the proportion of variance attributed to the negatively keyed items declined. Wording effects on the factor structure of the RSES seem to represent a response style artifact associated with cognitive abilities.