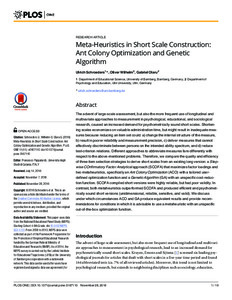 The advent of large-scale assessment, but also the more frequent use of longitudinal and multivariate approaches to measurement in psychological, educational, and sociological research, caused an increased demand for psychometrically sound short scales. Shortening scales economizes on valuable administration time, but might result in inadequate measures because reducing an item set could: a) change the internal structure of the measure, b) result in poorer reliability and measurement precision, c) deliver measures that cannot effectively discriminate between persons on the intended ability spectrum, and d) reduce test-criterion relations. Different approaches to abbreviate measures fare differently with respect to the above-mentioned problems. Therefore, we compare the quality and efficiency of three item selection strategies to derive short scales from an existing long version: a Stepwise COnfirmatory Factor Analytical approach (SCOFA) that maximizes factor loadings and two metaheuristics, specifically an Ant Colony Optimization (ACO) with a tailored user-defined optimization function and a Genetic Algorithm (GA) with an unspecific cost-reduction function. SCOFA compiled short versions were highly reliable, but had poor validity. In contrast, both metaheuristics outperformed SCOFA and produced efficient and psychometrically sound short versions (unidimensional, reliable, sensitive, and valid). We discuss under which circumstances ACO and GA produce equivalent results and provide recommendations for conditions in which it is advisable to use a metaheuristic with an unspecific out-of-the-box optimization function.