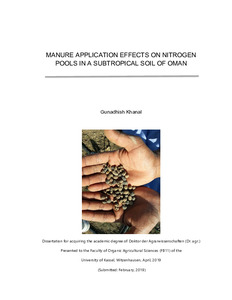 Agricultural productivity of the millennia-old oasis agriculture in Oman is based on the continuous application of high rates of goat and sheep manure combined with flood irrigation. The high nitrogen (N) and carbon (C) turnover in these systems is a result of year-around high temperatures and continuous soil moisture, but knowledge is lacking on how N and C are transformed under these conditions. Therefore, this study aimed at investigating the N movement in different soil N pools. To this end a field experiment was conducted where labeled or unlabeled goat manure with or without charcoal and mineral fertilizers were applied for two cropping season. The soil was collected at the end of each cropping season for incubation experiments where labeled or unlabeled manure was applied to unmanured soil or differently labeled manured soil. A modified acidified filter trap method was tested for the direct analysis of 15N in volatilized ammonia.
The acidified filter trap method recovered 81-87% of the standard NH3 gas and 63-78% of the NH3 volatilized from a NH4Cl solution, thus showing limitations in the accuracy of the system. The first-time manured soil (CM) resulted in cumulative N2O emissions of 141 µg N kg-1, of which only 22% was derived from manure which was more than three times higher than for repeatedly manured soil (MM). Microbial N in CM increased by 120%, of which only 32.5% was derived from manure. At the same time, K2SO4 extractable N was 37.48 µg g-1 for CM and 45.67 µg g-1 for MM that decreased by 38.6% and 7%, respectively, at the end of the incubation. This indicated larger soil-N availability for microorganisms than for manure-N, causing immobilization of N. No significant changes were observed in the second incubation experiment except that the K2SO4 extractable N was low in all treatments. Our study showed that freshly applied goat manure on unfertilized soil can trigger microbial growth and N2O emissions, causing a ‘priming effect’ compared to the repeated application of manure. In the field experiment, cabbage dry matter yield increased by 70%-167% for manured plots in the second cropping season, whereas yields in mineral fertilizer plots (Mn) remained similar. Basil yields also increased in the second cropping season, but there were no fertilizer effects. Charcoal application reduced cabbage yield in the first season. The leftover N derived from labeled manure (% Ndfm) at the end of the second cropping season was 9.9% for treatments that received labeled manure in both seasons, and 5.4%-5.5% for treatments that received labeled manure in the first cropping season and unlabeled manure in the second cropping season. This indicated that a significant portion of goat manure applied was recalcitrant for at least two seasons.