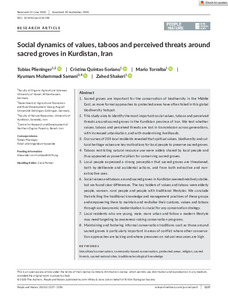 1. Sacred groves are important for the conservation of biodiversity in the Middle East, as more formal approaches to protected areas have often failed in this global biodiversity hotspot.
2. This study aims to identify the most important social values, taboos and perceived threats around sacred groves in the Kurdistan province of Iran. We test whether values, taboos and perceived threats are lost in transmission across generations, with increased urbanisation, and with modernising livelihoods.
3. Our survey of 205 local residents revealed that spiritual values, biodiversity and cultural heritage values are key motivations for local people to preserve sacred groves.
4. Taboos restricting natural resource use were widely shared by local people and thus appeared as powerful pillars for conserving sacred groves.
5. Local people expressed a strong perception that sacred groves are threatened, both by deliberate and accidental actions, and from both extractive and non‐extractive uses.
6. Social values and taboos around sacred groves in Kurdistan seemed relatively stable, but we found clear differences. The key holders of values and taboos were elderly people, women, rural people and people with traditional lifestyles. We conclude that eliciting the traditional knowledge and management practices of these groups and empowering them to maintain and revitalise their customs, values and taboos through socioeconomic modernisation is crucial for any conservation strategy.
7. Local residents who are young, male, more urban and follow a modern lifestyle may need targeting by awareness‐raising conservation programs.
8. Maintaining and fostering informal conservation traditions such as those around sacred groves is particularly important in areas of conflict where other conservation approaches are lacking and where pressures on natural resources are high.