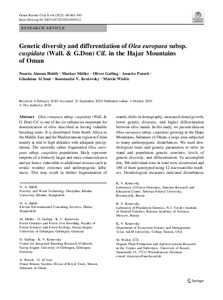 Olea europaea subsp. cuspidata (Wall. & G. Don) Cif. is one of the six subspecies important for domestication of olive described as having valuable breeding traits. It is distributed from South Africa to the Middle East and the Mediterranean region to China mainly at mid to high altitudes with adequate precipitation. The currently rather fragmented Olea europaea subsp. cuspidata populations likely represent outposts of a formerly larger and more connected area and are hence vulnerable to additional stresses such as erratic weather extremes and anthropogenic influences. This may result in further fragmentation of stands, shifts in demography, increased clonal growth, lower genetic diversity, and higher differentiation between olive stands. In this study, we present data on Olea europaea subsp. cuspidata growing in the Hajar Mountains, Sultanate of Oman, a large area subjected to many anthropogenic disturbances. We used dendrological traits and genetic parameters to infer its stand and population genetic structure, levels of genetic diversity, and differentiation. To accomplish this, 366 individual trees in total were inventoried and 188 of them genotyped using 12 microsatellite markers. Dendrological measures indicated disturbances mainly due to human activities. Height and crown area of individuals averaged 3.7 m (ranging from 0.2 to 12 m) and 14 m (ranging from 1 to 18 m), respectively. The stand conditional index was mainly 50%. The identified genetic variation within the sampled areas was relatively moderate. The expected and observed heterozygosity equalled 0.55–0.58 and 0.62–0.64, respectively. All individual genotypes were unique indicating the absence of clones. Though significant genetic differentiation was found, there was no evidence of population substructure suggesting effective pollen and long-distance seed dispersal in the past. However, changes in gene flow patterns may be reflected in the next (sibling) generation. Further studies are necessary to detect any changes in the future and to develop sustainable conservation strategies for this species.