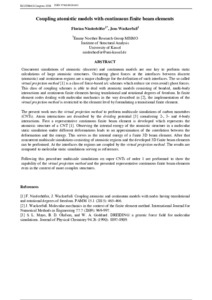 Concurrent simulations of atomistic (discrete) and continuum models are one key to perform static calculations of large atomistic structures. Occurring ghost forces at the interfaces between discrete (atomistic) and continuous regions are a major challenge for the definition of such interfaces. The so called virtual projection method [1] is a class of force-based a/c schemes which reduce (or even avoid) ghost forces. This class of coupling schemes is able to deal with atomistic models consisting of bonded, multi-body interactions and continuous finite elements having translational and rotational degrees of freedom. In finite element codes dealing with molecular mechanics in the way described in [2], the implementation of the virtual projection method is restricted to the element level by formulating a transitional finite element.