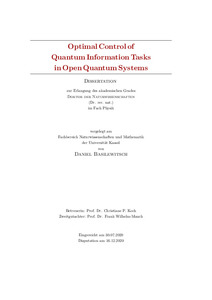 Every quantum system inevitably interacts with its environment. This is a fundamental requirement that allows us to control, measure and, in general, interact with quantum systems. In that respect, a quantum system's openness can be interpreted as prerequisite that enables quantum technologies in the first place. The latter are built to harness the intrinsic quantum mechanical behavior of quantum devices in order to build new, powerful technologies. However, a quantum system's openness also causes it to interact uncontrollably with all kinds of other environmental modes. This leads to dissipation whose impact is mostly detrimental. The ability to steer an open quantum system in a desired way and to protect it against dissipation is therefore of crucial importance.

This thesis explores how optimal control techniques can be used to improve the control of open quantum systems. The first part focuses on the development of new methods for the study of such systems. To this end, a new, reliable distance measure that allows optimization towards mixed target states has been constructed. This measure provides more information about existing state mismatches than comparable measures and is by construction compatible with gradient-based optimization algorithms. Mixed target states occur, for example, in the preparation of squeezed states in cavity optomechanics. Their preparation can be substantially accelerate when the control fields are optimized using the new distance measure. Moreover, a new method that allows to identify decoherence-free subspaces via optimal control techniques has been introduced. The method's general functionality and performance has been demonstrated by identifying decoherence-free subspaces in a network of qubits. However, the method's general abilities are not restricted to the search for decoherence-free subspaces.

The remainder of the thesis then focuses on how optimal control allows for deriving new control strategies that cope best with the environment's presence. To this end, three tasks have been considered that are fundamental for quantum technologies. First, qubit reset has been considered, where the presence of the environment is even a necessity for the task's feasibility. Optimal control has been used to identify the fundamental limits of qubit reset in time and fidelity and has derived time-optimal reset strategies. These results have been obtained for qubit reset employing a tunable environment as well as when utilizing a single, strongly coupling ancilla mode from the environment. The other two examples focus on how optimized control fields can assist in diminishing the environment's detrimental impact. To this end, a state discrimination task has been investigated, which is a typical problem in quantum metrology. It has been shown that, in the presence of dissipation, optimized control fields improve the distinguishability between states and thus improve the metrological performance of the discrimination task. Lastly, the implementation of an entangling quantum gate between qubits has been considered, which is pivotal for quantum computers. By means of optimal control, an analytical control strategy has been derived that readily accelerates the implementation of an entangling quantum gate between bosonic modes. Due to the reduction in the gate duration, this leads to an improved robustness of the gate with respect to dissipation.