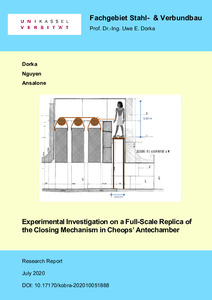 The 4th Dynasty Pyramids are an enduring technological enigma to most scholars. An important reason for this is a lack of necessary background: Most archeologists do not have the knowledge to develop solid technological solutions and most engineers don’t know the techno-archeological evidence, which is mostly unrecorded. Too often, this produced fantasy solutions lacking solid engineering proof of functionality, techno-archeological evidence, or both, with too many of them even accepted in scholarly circles. There is in fact enough techno-archeological evidence that reveals not only the structure of these buildings, but also the building sequence and some of the key technologies that were used. One of them was the very precise placing of heavy blocks by lowering them into position. It was the purpose of this investigation to study this key technology and shed light on the possibilities that it offered to the scribe-engineers. It was a replica of Cheops’ antechamber with its portcullis mechanism that allowed us to do that. We were able to show that, two persons can lower the 2.5 tons portcullises smoothly with ease using a technology based on archeological evidence in all its details. It also became apparent that this mechanism did not provide security. It may have been purely ceremonial as a befitting challenge to the extraordinary technical skills of Cheops’ scribe-engineers. The videos do not work properly on Safari, it is suggested to use Firefox.