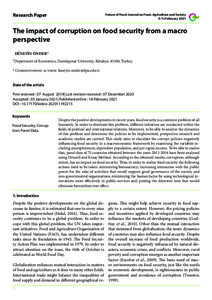 The impact of corruption on food security from a macro perspective

Despite the recent developments food security is one of the common problems of humanity. In order to eliminate this problem, various initiatives are taken in the fields of political and international relations backed by many academic studies that are conducted to scrutinize the dynamics of the problem and inspire the policies to be implemented. This study aims at providing macro solutions to the problem through the study of the relationship between food security and corruption in view of variables such as unemployment, dependent population and per capita income. Thus, the panel data of 75 countries between the years 2012-2016 have been analysed using Driscoll and Kraay Method. According to the obtained results, corruption, although minor, has an impact on food security. Thus, in order to realize food security the following actions need to be taken: minimizing bureaucracy; increasing interaction with the public power for the sake of activities that would support good governance of the society and non-governmental organizations; minimizing the human factor by using technological innovations more effectively in public services; and putting the deterrent laws that would eliminate favouritism into effect.