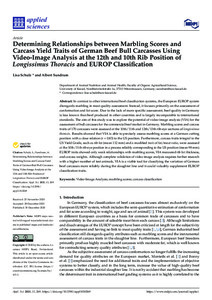 In contrast to other international beef classification systems, the European EUROP system disregards marbling in meat quality assessment. Instead, it focuses primarily on the assessment of conformation and fat score. Due to the lack of more specific assessment, beef quality in Germany is less known than beef produced in other countries and is largely incomparable to international standards. The aim of this study was to explore the potential of video-image analysis (VIA) for the assessment of bull carcasses for the commercial beef market in Germany. Marbling scores and carcass traits of 170 carcasses were assessed at the 10th/11th and 12th/13th rib-eye sections of longissimus thoracis. Results showed that VIA is able to precisely assess marbling scores at a German cutting position with a close relation (r = 0.83) to the US position. Furthermore, carcass traits integral to the US Yield Grade, such as rib fat (mean 112 mm) and a modified trait of fat/meat ratio, were assessed at the 10th/11th rib-eye position in a process reliably corresponding to the US position (mean 98 mm). EUROP traits showed only weak relationships with marbling scores, VIA measured rib fat thickness, and carcass weights. Although complete validation of video image analysis requires further research with a higher number of test animals, VIA is a viable tool for classifying the variation of German beef carcasses more reliably during the slaughter line and it could valuably supplement EUROP classification traits.