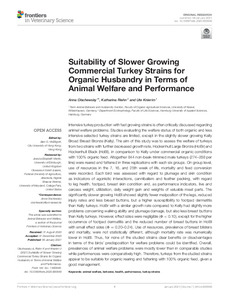 Intensive turkey production with fast growing strains is often critically discussed regarding animal welfare problems. Studies evaluating the welfare status of both organic and less intensive selected turkey strains are limited, except in the slightly slower growing Kelly Broad Breast Bronze (Kelly). The aim of this study was to assess the welfare of turkeys from two strains with further decreased growth rate, Hockenhull Large Bronze (HoBr) and Hockenhull Black (HoBl), in comparison to Kelly under commercial organic conditions with 100% organic feed. Altogether 844 non-beak-trimmed male turkeys (274–288 per line) were reared and fattened in three replications with each six groups. On group level, use of resources in the 7, 16, and 25th week of life, mortality and feed conversion were recorded. Each bird was assessed with regard to plumage and skin condition as indicators of agonistic interactions, cannibalism and feather pecking, with regard to leg health, footpad, breast skin condition and, as performance indicators, live and carcass weight, utilization, daily weight gain and weights of valuable meat parts. The significantly slower growing HoBl showed slightly fewer malposition of the legs, reduced injury rates and less breast buttons, but a higher susceptibility to footpad dermatitis than Kelly turkeys. HoBr with a similar growth rate compared to Kelly had slightly more problems concerning walking ability and plumage damage, but also less breast buttons than Kelly turkeys. However, effect sizes were negligible (Φ < 0.10), except for the higher occurrence of footpad dermatitis and the reduced number of breast buttons in HoBl with small effect sizes (Φ = 0.20–0.24). Use of resources, prevalence of breast blisters and mortality, were not statistically different, although mortality rate was numerically lower in HoBl. Thus, for none of the studied strains clear benefits or disadvantages in terms of the birds' predisposition for welfare problems could be identified. Overall, prevalences of animal welfare problems were mostly lower than in comparable studies while performances were comparatively high. Therefore, turkeys from the studied strains appear to be suitable for organic rearing and fattening with 100% organic feed, given a good management.