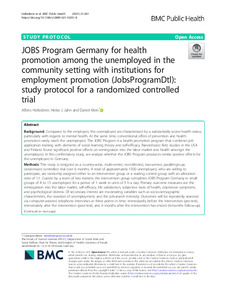 JOBS Program Germany for health promotion among the unemployed in the community setting with institutions for employment promotion (JobsProgramDtl): study protocol for a randomized controlled trial

Background
Compared to the employed, the unemployed are characterized by a substantially worse health status, particularly with regards to mental health. At the same time, conventional offers of prevention and health promotion rarely reach the unemployed. The JOBS Program is a health promotion program that combines job application training with elements of social learning theory and self-efficacy. Randomized field studies in the USA and Finland found significant positive effects on reintegration into the labor market and health amongst the unemployed. In this confirmatory study, we analyze whether the JOBS Program produces similar positive effects for the unemployed in Germany.

Methods
This study is designed as a country-wide, multi-center, non-blinded, two-armed, parallel-group, randomized controlled trial over 6 months. A total of approximately 1500 unemployed, who are willing to participate, are randomly assigned either to an intervention group or a waiting control group with an allocation ratio of 1:1. Guided by a team of two trainers, the intervention group completes JOBS Program Germany in small groups of 8 to 15 unemployed for a period of 1 week in units of 5 h a day. Primary outcome measures are the reintegration into the labor market, self-efficacy, life satisfaction, subjective state of health, depressive symptoms, and psychological distress. Of secondary interest are moderating variables such as socio-demographic characteristics, the duration of unemployment, and the job-search intensity. Outcomes will be repeatedly assessed via computer-assisted telephone interviews at three points in time: immediately before the intervention (pre-test), immediately after the intervention (post-test), and 6 months after the intervention has ended (6-months follow-up).

Discussion
This confirmatory study will provide empirical evidence on the effectiveness of the JOBS Program on the reintegration and (mental) health of the unemployed in Germany. If our results from the randomized controlled trail in a country-wide field experiment confirm its effectiveness, the JOBS Program Germany could, perspectively, be implemented into the German employment promotion and social security system on a long-term basis.