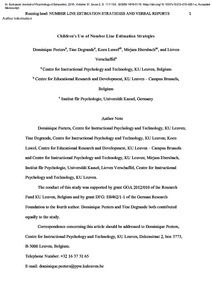 This study tested whether second graders use benchmark-based strategies when solving a number line estimation (NLE) task. Participants were assigned to one of three conditions based on the availability of benchmarks provided on the number line. In the bounded condition, number lines were only bounded at both sides by 0 and 200, while the midpoint condition included an additional benchmark at the midpoint and children in the quartile condition were provided with a benchmark at every quartile. First, the inclusion of a midpoint resulted in more accurate estimates around the middle of the number line in the midpoint condition compared to the bounded and, surprisingly, also the quartile condition. Furthermore, the two additional benchmarks in the quartile condition did not yield better estimations around the first and third quartile, because children frequently relied on an erroneous representation of these benchmarks, leading to systematic estimation errors. Second, verbal strategy reports revealed that children in the midpoint condition relied more frequently on the benchmark at the midpoint of the number line compared to the bounded condition, confirming the accuracy data. Finally, the frequency of use of benchmark-based strategies correlated positively with mathematics achievement and tended to correlate positively also with estimation accuracy. In sum, this study is one of the first to provide systematic evidence for children’s use of benchmark-based estimation strategies in NLE with natural numbers and its relationship with children’s NLE performance.

This is a post-peer-review, pre-copyedit version of an article published in European Journal of Psychology of Education. The final authenticated version is available online at: http://dx.doi.org/10.1007/s10212-015-0251-z
The conduct of this study was supported by grant GOA 2012/010 of the Research Fund KU Leuven, Belgium, and by grant DFG: EB462/1-1 of the German Research Foundation to the fourth author.